* * * * * *
I arrived in Yerevan in the middle of the night, and the first impression the city gave me were the colourful lights of the casinos along the street leading from the airport to the city.

I lived in a flat right in the center of the city. Around there were a lot of building sites – old houses are getting torn down, new, high buildings are built very fast. The flat belongs to a familiy of the Armenian diaspora, it was very clean, maybe too clean, and did not seem really used, there were no books, and everything maybe a bit beneath reality.

Eva introduced me very nicely to the Armenian Art Scene, showed me different places and at one of the first evenings we went to a party at the Cultural Center, a wonderful place in a small house, run privately as there is no support by the state. I also visited a presentation at a very interesting off-space in the center of the city, run by two young curators.

As I planned to do an artwork in public space, I had to decide which public I wanted to talk to. Also I thought about what kinds and possibilities of public spaces there are. So the first days in Yerevan I was walking around the city a lot, then I was biking.

The center of Yerevan appeared to me completely different than the other districts: incredible building activities are going on, strange new skyscrapers without any significant style or visible meaning are built, most of them still empty. A new representative street, the Northern Avenue, was made, pointing from the Republic Square to the statue of the “Mother of Armenia”. It is plastered with expensive stores. In the evening, wealthy Armenians and tourists would go shopping there and show themselves with huge bags with international names on them. Just behind these buildings, the old small houses are visible, most already half-torn, some inhabitants still living there.

In the other districts, the “western” life-style of the center is not visible anymore. People are talkative and very open. On the different markets a wide range of home-made products can be found, like hot sauces, pickles, yoghurt, cheese and vodka. In the evening, at dinner time, some people would make an open fire in front of their house for the barbecue. But most I liked the mixture of city and countryside: for example, when walking to Bangladesh, a district of Yerevan, there is a shortcut through an area that is not defined on the city map. This area is consisting of different small animal farms, fields and huts, and also some rivers go through. So just beneath the central district, in the middle of huge houses and busy streets, farmers, or part-time farmers, are living.

As a coincidence, a very good friend from Georgia was in Yerevan at the same time. She was there with her car, so we made a tour to the countryside. We were impressed by the fast changing landscapes and the differences of the small cities and villages depending on the area. The touristic places seemed quite un-touristic to us too, though partly there are already quite huge hotel complexes. In less touristic areas also the villages and cities would look completely different and have less good infrastructures.

I was also interested in realising a project in a small city or on the countryside and considered different possibilities, but I was worried on how to deal with my position as an observer from outside, who even does not understand or know much. Maybe it was necessary to find something that would open up another view, instead of a comment or observation on something existing.

When walking through the center of Yerevan I was quite interested in the souvenir-shops, to see how Armenia was presenting and representing itself through books and postcards and what the pictures and themes are about. So I finally decided to use the new-built infrastructure in the center of Yerevan for my project, and the Armenian diaspora and tourists as my audience. I invented new tourist attractions and landscapes by making photos of details of things in public space that people pass by every day; just by changing the perspective there would be a new sight. From those photos I was printing a series of postcards. Searching for the sights I could work in the different districts of Yerevan as well as in the countryside. Eva helped me with the printing company and so I could produce approximately 1500 postcards and spread them in the souvenir-shops. It was not too difficult to put them there, as most employees of the shops would not care much and watch too closely what was happening at their postcard rack.

Soon after my arrival I noticed the many old facades, which had each single stone numbered after a certain system. I did not understand what this system was about, but later Eva told me, that, as an answer to the protest of many architects and intellectuals against the destruction of the old city center, the government started numbering each stone of some of the facades of the old houses, promising to put them up again in another place.

My friend Michael Klemmer and I were quite interested in the ongoing activities of construction and desconstruction of the center, which is dealing with the theme of self-representation of the city and the country as well. As everyone in Yerevan is familiar with it, we decided to abuse the system of numbering and to use it as a language for an intervention. In the center many alleys and tunnels, which are used for walking through to the courtyards often containing shops or offices, are getting painted on behalf of the owners – mostly showing romantic sceneries and views from the countryside. The alley beneath the house we were living in, was not painted yet. By numbering it we tried to carry the numbering system to the absurd, making the alley an architectural structure in itself and suggesting it would get torn down and built up in another place. 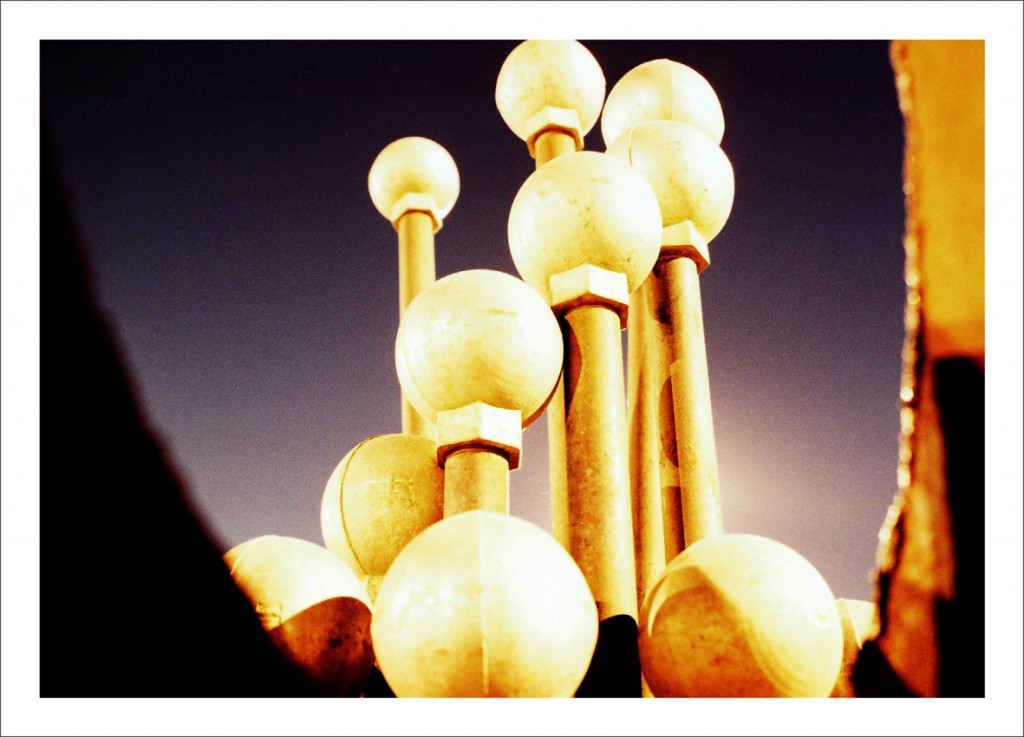 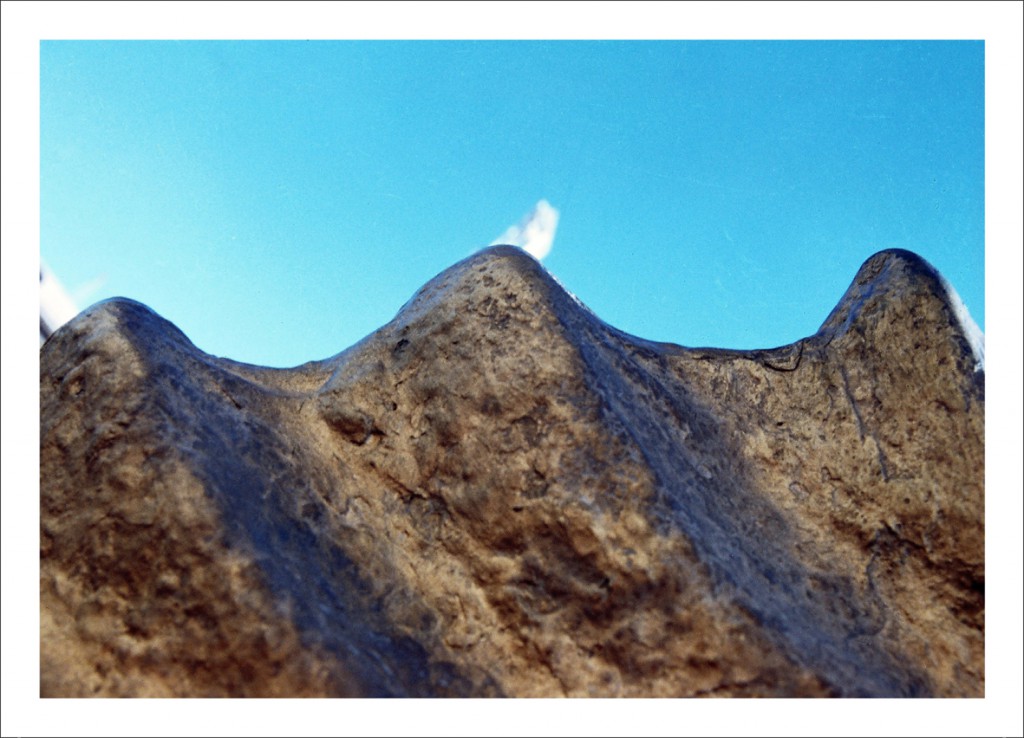 Backside of a postcard: 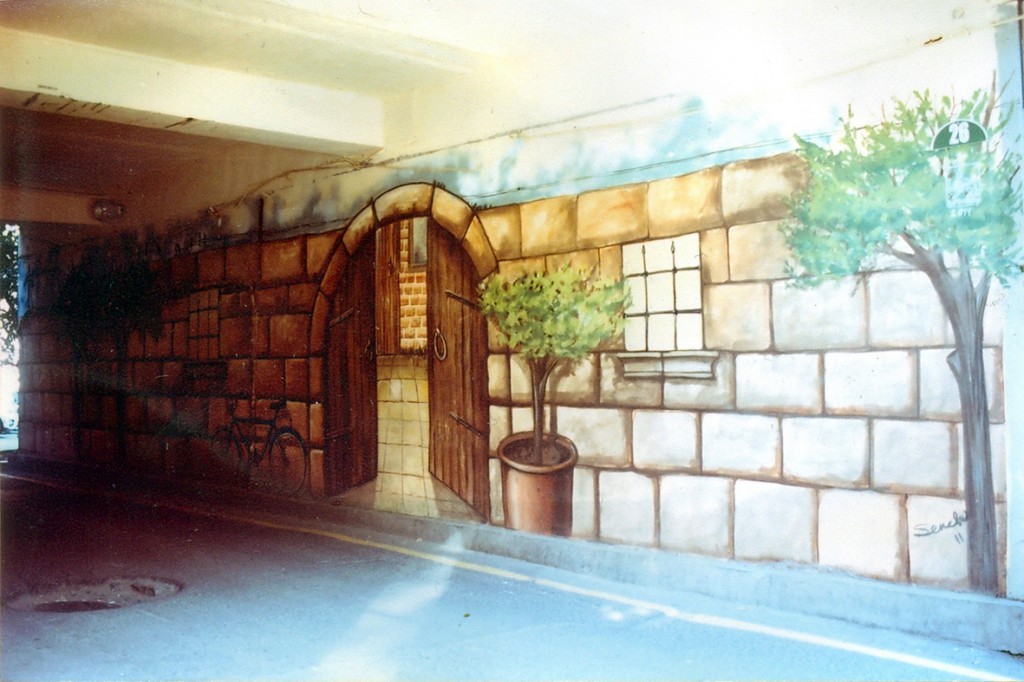 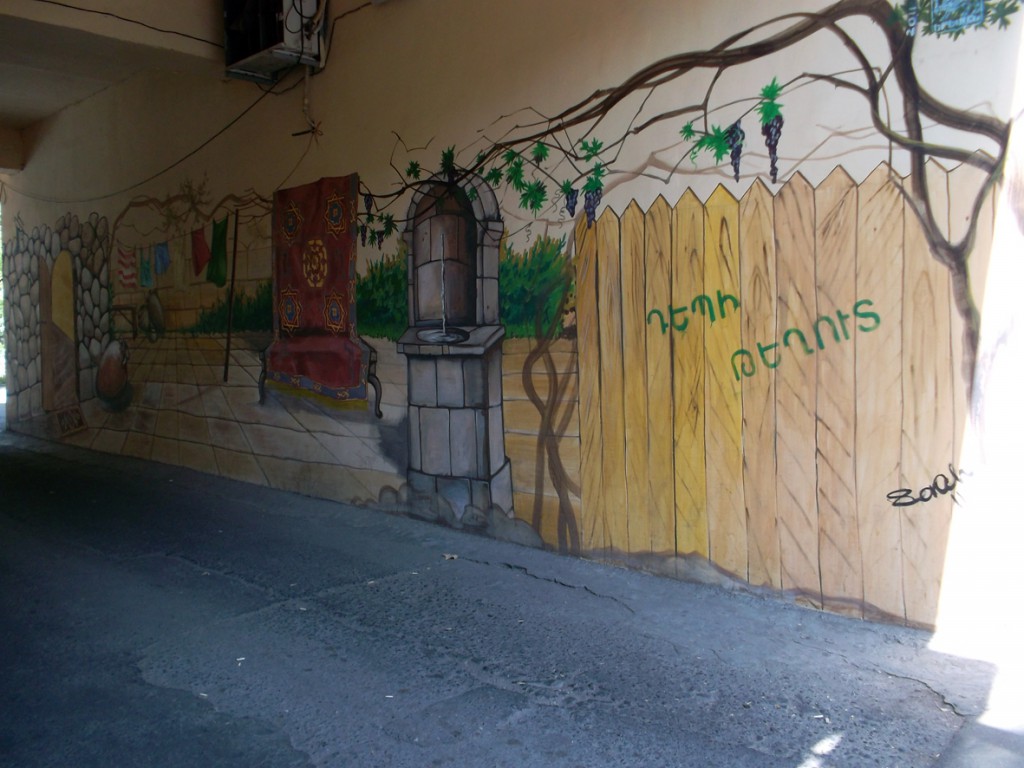 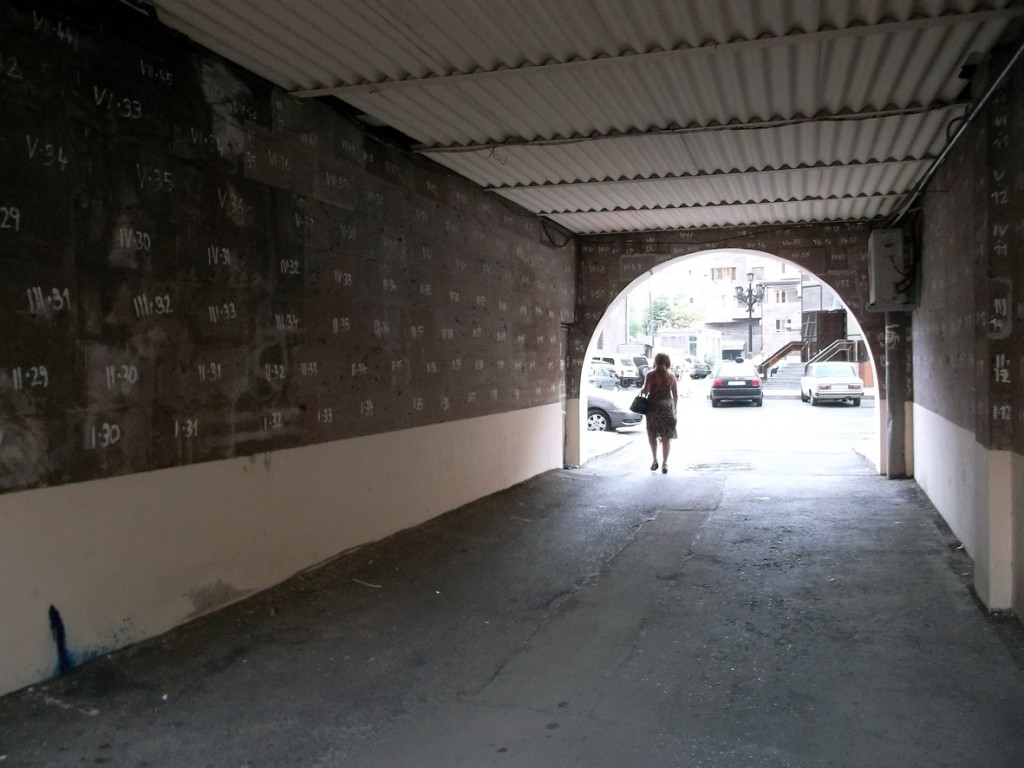 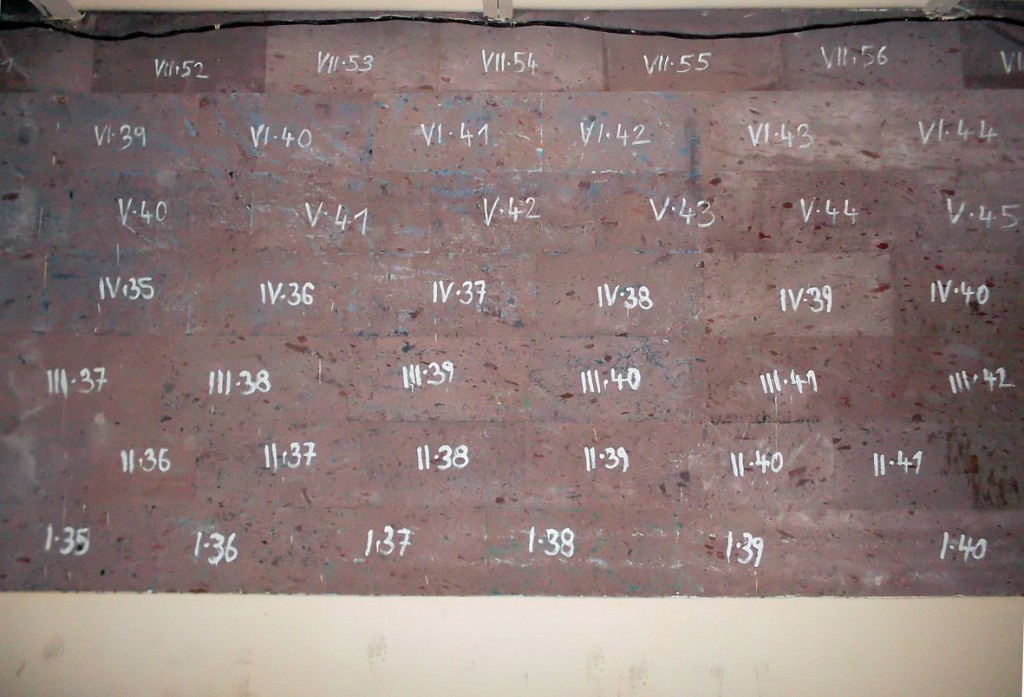 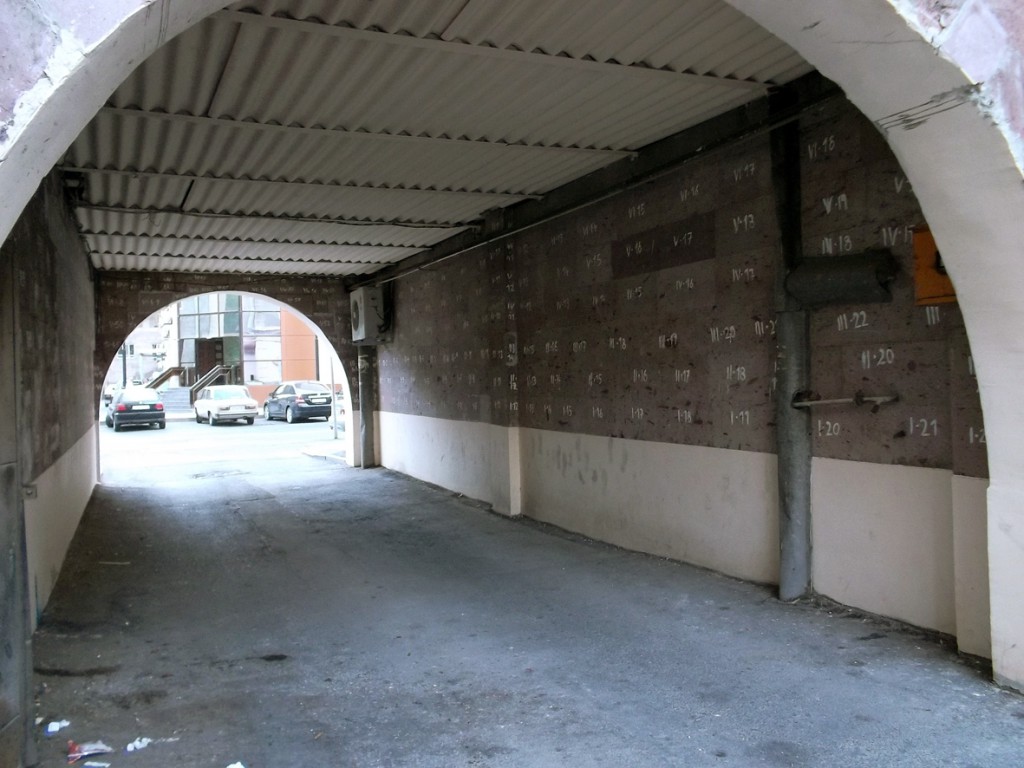